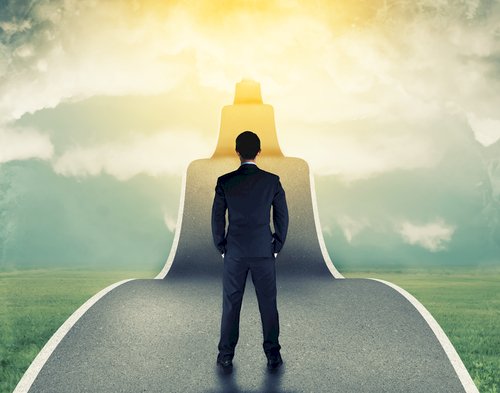 “Our greatest weakness”, said T.A.Edison ” is giving up; the surest way to success is always to try just one more time”.

We must keep on trying until we reach the goal we have set. The golden words of Swami Vivekananda, “Arise, Awake and Stop not till the goal is reached,” exhort us to be firm. It is often that after two or three trials a person stops. He feels that he is a faluire. He is unable to achieve anything. He cannot do anything or he curses his luck for it. But it is not so. Actually, it happens because we do not have a set target before us. We are not sure about what we have to do. Therefore, be always certain about what you have to achieve or about your goal. Have dreams but don’t make your life a dream. But always try to give them a practical shape. Translate them into reality. Strive for the possible. Don’t run after the impossible. It is untrue that aperson is incapable of doing substantial things. The only thing we need is to understand how to use our faculties properly and rightly. First of all decide your aim and make sure that it is right and worthwhile. While you choose your destination, you must accept your potential and drawbacks. Before you go for a goal, assess you qualifications, interest, aptitude and power. Thomas Alva Edison used only eight percent of his brain; where as, an average human being uses only 2-3% of total. Einstein used a small fraction of mind and gave us the theory of relativity. Imagine his contribution, if he had used his total mind. We don’t even try to use that much of total mind because we are always caught between to do and not to do. It is natural for us to be up set when circumstances and conditions don’t favour us. We take it to heart. We stop trying as nothing is more for us and we lose our potential but what is lost is self-confidence. “I have not failed. I’ve just found 10,000 ways that won’t work.” Edison said after he succeeded in inventing the bulb. Now, how do you reframe failure? How do you look at it so you don’t feel overwhelmed and give up? Well, you can look at failure as a part of a process. You look at it as ways that won’t work. You draw lessons from those ways. Then you let that go, focus on the present and try again time of great difficulties. How strong the wind may be, it cannot move the hill. Ultimately wind has to change its direction. Such is the case of a firm person. Difficulties & problems do nothing to his determination. Our mind may be called as the control room of all our deeds and thinking. Keep success in your mind. Do not leave any room for discouragement there. Many people will try to make your get diverted from your pa th, many obstructions will be put in you way. Don’t pay heed to them. “A successful man”, says David Brinkly “is one who lays a firm foundation with the bricks other throw at him”. It has been proved from the history of the successful persons of the past that success is that fruit, which is not easily obtainable, its seed is to be sown in the soil of mind, watered with positive thinking, determination and will power. Efforts, self -confidence are fertilizers for it. And “one more time” attitude after several  failures would work as manure for it. Ultimately that seed converts into the tree and you get the fruit of success. It must be kept in mind that “As you sow so shall you reap”. It is, therefore, very important to choose the right way. Intentionally or by chance a wrong step can before you step into that way. Confirm if it right or wrong. Because time once lost never comes again and what we remain with is only regret. Don’t fish into troubled waters. La Bruyers says, “There are only to ways of getting on in this world; by one’s own industry or by the weakness of others”. Napoleon & Hitler decided to conquer the world, they did so. But the only positive thing they had was strong determination. Mahatma Gandhi on the other hand also conquered the world, but his way was right. He did so by imparting his teachings to the world. Scientists have contributed a great deal in advancing the world in various fields. But some gave us the hope of life by providing us with useful life saving drugs and on other hand hand the others made our existence on the planet unsafe by inventing atomic bombs. T here are countless examples of the great personalities in the history of India who had decided something to get something and they succeed. Gandhi, Mauluna Azad, Nehru, Lala Lajpat Bai, Bhagat Singh, SC Bose etc. etc dreamt to see India free, they struggled and got it. Don’t let frustration or failure to become an obstruction in your way to success. Discard all the distractions and turn a deaf eay to what others say about you. Use your faculties and qualities in proper direction. Always consider your weaknesses, drawbacks, shortcomings and confusion whenever you observe them with in yourself and discard them. You will be a successful man. Mahatma Gandhi has said, “Be your own judge and your success is guaranteed”. Always keep in mind that we are born to succeed and success is for us. But we have to achieve it.

“Men are born to succeed, not to fail”, said Herry Daid Thoreau. What we require is determination and self confidence.

Always be single minded. Don’t split you mind in different parts. Be certain about a single goal you want to achieve. Don’t think of

Other goals until you achieve the first one.Think success, success & success.