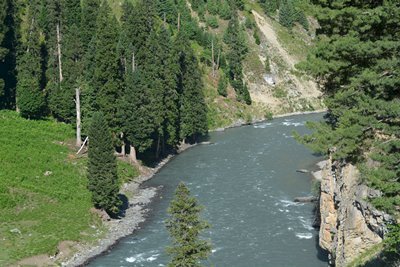 Poonch, place with cultural and historical importance is the witness of a yawning anecdote comprising of sweet and sour memories rendering smile and frown on the face of humanity. Since independence, Poonch has remained at the losing end, faced unresponsive, unsympathetic, negligent attitude from the people at the helm of affairs. Voices, if raised against injustice have been stifled at the preliminary phase. “Divide and Rule” policy of the British still prevails around, larger concentrated power is broken up into pieces to govern the people for their own vested interests. The more we are divided, the weaker we are. It’s easily possible for anybody to rule the segregated sections of the single society with common socio-cultural and traditional history of Poonch.
If we peep deep into the history, we find heap of stinking bogus promises from all the corridors of the system from top to bottom. Men in Power has always given a deaf ear to public outcry and failed to redress their grievances in this part of the state.
This ever ignored area of the Border District of Poonch where “Life is tale told by an idiot full of sound and fury signifying nothing” for the people especially residing along the Border Lines. We have war affected and conflict affected families both among Hindus and Muslims who chanted the name of the beloved country even at the cost of their lives and comforts and consequently they had to lose their earning members of the family or otherwise their loved ones too. We have many families pulling on with their lives with great difficulties. Most of the people have lost their limbs along the border lines and their comfortable lives have transformed into the lives full of privations and vexations. Quite unable to earn, they are seen while begging from door to door for the survival of their little kinds. There are no well defined facilities for the education of their children and their economic security. Apart from it, the poor transportation, communication, Educational backwardness, poor health conditions are some other striking issues faced by the people of this District. Despite many deputations and delegations the erstwhile Governments have always turned a deaf year to their deplorable plight and they been treated as an unwanted burden the Government exchequer. To me they are the real patriots who suffer silently for their motherland.

The main focus of the government has ever been on the Kashmir tourism. The tourism in Jammu and Kashmir is the attributed to the tourism of Kashmir. But the Pirpanjal region of this state if developed from tourism point of view can outshine Kashmiri tourism unsurpassably. There are about nine lakes alone in District Poonch which despite being ignored are of matchless beauty and they can add considerably to the economic prosperity of the Jammu region. Apart from it there are hundreds of other historical spots which require instant attention of the Government. In addition to it all these tourist installations are required to be linked with the national highways so that the tourists from all nook and corners of the country can be attracted. The new government has also put this point of concern on their agenda of development. The geographical and topographical location of this Jammu region, scattered oddly on about 30 kilometers of hilly area, demands the launching of air services to make all the hilly districts well connected. Tehsil Headquarter of Surankote is of central importance for launching the Air Service. Surankote, one of the tehsils of Poonch and ever neglected area by the politics, is not less beautiful than Kashmir valley. It is worthwhile to mention the fact that district Poonch is very rich in natural resources. It is just one just one step away from the right click and the moment it finds an opportunity, it will touch upon