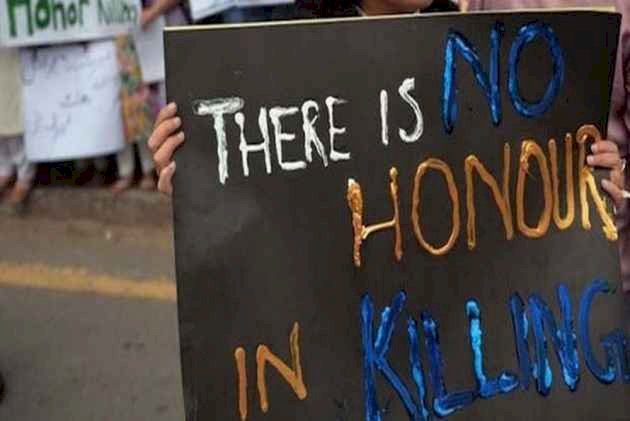 Amid innumerable crimes against women, honour killing is the most atrocious and cold blooded of all. Unlike other crimes, this appalling act is committed by one’s own blood relations like parents, brothers, maternal and paternal uncles. Honour killings have reduced we human to the least level of humanity. It is very hard for me to digest that how the parents who have given birth to a girl child, worked hard for her upbringing and dreamt a lot for her bright and affluent future soon turned into wild beasts and commit murder of their most dearest child over a pity reason of loss of honour. Can any body answer me? Are these shallow social norms more important then life? The answer is big no because norms were made for the comfort of human being. More over the norms which our society considers important are actually baseless and with out any religious back ground. It is not mention even in a single religious book of world that if an adult girl shows her consent to marry a man against the will of her parents, it is irreligious or loss of honour. It is not at all a loss of honour if, a young girl desirous to marry out of her cast, it is not at all loss of honour if, an innocent girl is subjected to rape, it is not at all loss of honour if, a girl chooses to marry a boy of low cast. Irony is, this crime is rising at an alarming rate. According to statistic from united nation, one in five cases of honour killing internationally come every year from India. Off 5000 reported cases internationally 1000 are from India. Indian states like Punjab, Haryana and U.P are reported to have largest number of honour killing cases.

After going through the text of major religious books of world it become evident that all those norms which society has made in order to suppress any one’s personal choice of marriage, have no mention in any religious book of world. If, girl’s selection of a man would be a loss of honour then it should have been mention in any of the religious book of world. So, it is a ripe time to awake the society from deep sleep of ignorance and brutality. Society should take following step in order to eradicate the weed of honour killing from our society.

(4) Do not inflict your ego over your siblings. Because it is not the ego and shallow social status which matters but it is the life, relation and happiness of relation around you which matters. More over if someone kills his daughter or son-in-law for saving his honour, it would further dishonour him by throwing him behind bars under charges of massacre.

Hence in the end, I would like to emphasis that God has created us to ascertain compassion not viciousness.

THE FUTURE OF PATRIOTIC "PAHARI TRIBE" IS IN DILEMMA.